So some of you may have seen a mini clubman for sale in Kristianstad.

I was interested in the car , sent some messages to the seller, spoke with the seller. all was good. He sent me a picture of his driving license (guy called Johan). I checked his address and it didn't match, but he explained that is why he is selling , as he he has moved and the car needs to leave the garage. I was little concerned.

I asked to view the car and was told he near the car until Wednesday. We spoke about the car and he seemed convincing, not a mini expert but he knew some stuff. He explained that a few people were coming to view the car on Wednesday. I asked if he would take a deposit. At first he said no. He said he would prefer we come and see it first, I asked again and then he said Ok.

I paid 3000. He wanted it paid to his bank, but i didnt want to wait too long for the transfer, so I suggested Swish. He said he didnt have swish, but would call his mates to see if they did. AN hour later he sends me an SMS saying his friend has Swish and sent the number. I paid the money and confirmed his friends name "juri"

I posted on TMF about buying the car - and then a Norwegian member told me the car was for sale in Norway! I found it on finn.no.

I immediately tried to contact the seller (who I thought was called Johan was obviously yuri), he would not answer his phone, but answered an sms asking for my bank details to refund the money. LOL.

I looked up Johan on Eniro and gave him a call, turns out Johan was also conned and now Yuri is using his ID to con others. In total 6 people now.

I have learned that when something is too good to be true it probably is.
Upp 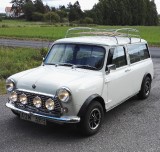